The Toyota 86 GT (ZN6) (otherwise known as the GT86 or the ZN6) is a series of 2+2 seater sports cars manufactured both by Toyota and Subaru from 2012 onwards. It features a boxer engine located in the front of the car, a rear wheel drive drivetrain and a fastback coupe-styled body

The Toyota 86 GT is featured in MF Ghost as the car of choice for Kanata Katagiri, in which he makes it to the preliminaries with, albeit barely. The car itself lacks in performance once compared to the other vehicles within the MFG. It has a significantly low amount of horsepower and a slightly inferior handling capability. It was previously owned by Ogata. 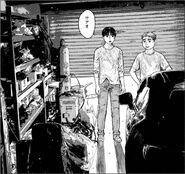 Retrieved from "https://mfghost.fandom.com/wiki/Toyota_86_GT_(ZN6)?oldid=841"
Community content is available under CC-BY-SA unless otherwise noted.