Edit
watch 01:36
We're Getting Mutants in the MCU - The Loop
Do you like this video?
Play Sound

Takuya Yanagida (柳田 拓也 - Yanagida Takuya) is a "Godly Fifteen" racer who participates in MFG. He ranked 6th in MFG Year 3 and 8th in MFG Year 4 (Round 3). He drives car number 6.

Despite being overtaken by Akabane in the first round, Takuya took advantage of Kaito's momentary weakness and stabbed him back in the right corner.

This led him to change his mindset from taking the top position in the qualifying round, then using the horsepower and size of the car to win without letting the enemy get in front and he decided to attack on his own. After Round 3, he switches to the M4 DTM Edition, which is smaller than the M6 Coupe and has better cornering performance. 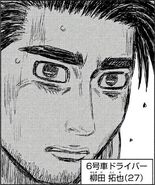