Edit
watch 01:36
We're Getting Mutants in the MCU - The Loop
Do you like this video?
Play Sound

Takumi Fujiwara (藤原 拓海 "Fujiwara Takumi") is a former street racer and retired rally championship driver with a title and several records held, and currently Kanata Katagiri's and Emma Green's mentor. He is mentioned in a couple of chapters and is briefly shown in Chapter 25.

Takumi Fujiwara left Japan for the United Kingdom at the age of 20 to participate in the British Rally Championship (BRC), driving for Toyota Gazoo Racing. On his 3rd year in the championship, he is finally awarded the title. During his time in the British Rally, Takumi took part in a variety of WRC events where he produced stable results. At that time it was discovered that he had a weakness on gravel, but excelled amazingly on tarmac.

Eventually, after signing a contract with Toyota Gazoo Racing, the driveshaft of his Toyota GR Yaris WRC snaps during a pre-season test run, sending him off-course into a ravine and crashing heavily, where he sustained critical injuries. The crash forces him to retire from competitive racing and go into rehabilitation. Despite this, he still remained close to the sport. After his recovery, he became an instructor at Royal Donington Racing School (RDRS), where he trained Kanata and Emma Green. As an instructor, Takumi's teaching style was not to teach everything by hand, but to give students a vague task and then let them figure out the answer by themselves.

In the third round, it was revealed that he was married a year before the main event.

Before signing up for the British Rally Championship, Takumi was a street racer who had illegally raced on the mountain passes of Gunma, Japan (and surrounding provinces) using an AE86 Toyota Sprinter Trueno GT Apex. 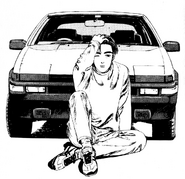 Takumi Fujiwara (left) on the cover of Chapter 25