Ren Saionji (西園寺恋 - Saionji Ren) is the daughter of the family that main character, Kanata Rivington moves in with. She is the main female protagonist and has had feelings for Kanata since the day they met, even though she didn't believe in such a thing as "love at first sight".

Ren is the daughter of the Saionji family. Her parents were good friends with Kanata's parents which lead to Kanata moving in with her family when he comes to Japan alone. Ren instantly feels positively towards Kanata and offers to help him with his goal of finding his lost father.

Ren has a part time job working as an MFG Angel. She is new to MFG as an employee this year (Year 4).

Ren's Angel profile is the only page with no information on it as she decided to not disclose her information, being only a high school student. Part of the reason for this being also that she finds the outfit very embarrassing.

As an Angel, Number 7 doesn't show much emotion, leading people to be intrigued in her mysteriousness, especially since she has no public profile either.

Angel Number 7 has also managed to pick up a fan in the form of Shun Aiba, who formed a crush on her, considering her his type. She doesn't reciprocate those feelings however, giving him the cold shoulder whenever possible.

Currently, nobody besides the top staff of MFG know Number 7's identity. Even Kanata has been unable to figure it out. 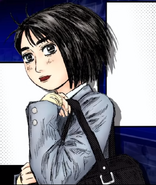 Ren as she appeared in Initial D Arcade Stage Zero Ver. 2
Add a photo to this gallery

(Chapter 28)
Add a photo to this gallery

Retrieved from "https://mfghost.fandom.com/wiki/Ren_Saionji?oldid=824"
Community content is available under CC-BY-SA unless otherwise noted.