Mikhail Beckenbauer
The Porsche 718 Cayman S (often abbreviated to just the Cayman S or 718) is a 2-door, 2-seater fastback coupé sports car built by German manufacturer Porsche. The first Cayman was revealed and placed on sale in 2005, with later limited editions of the Cayman S going on sale in 2008.

The 718 Cayman S appears in MF Ghost as the vehicle of choice for Mikhail Beckenbauer as car number 12. It has been stated to have been modified; but stock statistics state that it has 350 bhp and a maximum torque of 420 Nm. It is a rear wheel drive, and has a top speed of 177 mph (possibly higher due to Beckenbauer's modifications.) 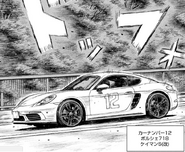 The Cayman S' appearance in the MFG teaser trailer