Ogata has an old relationship with the Saionji family and is also a friend of Aiba. He is a very expressive character who can be quite dramatic. He also enjoys sweets.

Ogata meets Kanata Rivington through Mr. Saionji and takes up the position of Kanata's support for the MFG, being on the other end of the radio for him and tuning his car. The car that Kanata races in in MFG is actually Ogata's car that he used in the past. He is an ex-racer and has raced in the MFG, but after a disastrous defeat in the qualifying round, and in order to support his father, who is in the hospital, and to pay off the debts of the body shop, he begins to concentrate on being a mechanic, as that is more his skill area than racing.

Initially, he intended to take only 20% of Kanata's prize money, saying that the risk Kanata was taking was too high, but Kanata insisted, and he signed a contract with him to take an equal share. 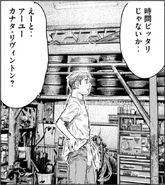