The Nissan GT-R Nismo (R35) is a 2 door 2+2 high performance vehicle produced by Nissan. It is often referred to as the GT-R R35, similar to how its predecessors were referred to.

The Nissan GT-R Nismo appears in MF Ghost as the vehicle of choice for Shun Aiba, and appears to be modified. It is a white car with small tints of red, and is equipped with a rear wing. The GT-R is a high performance vehicle that is competent enough in keeping up with the other cars, and is known as a crowd pleaser. It has 570 bhp, impressive handling capability and is able to reach up to speeds of at least 197 miles per hour. 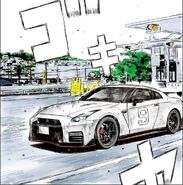 Shun Aiba's GT-R as shown in the manga (Chapter 1)