Michael Beckenbauer is a racing prodigy from Germany, who has graduated Porsche's Motorsport Academy. His entry to the MFG series is said to have "rocked the whole scene". However, Michael is dissatisfied with the level of MFG, stating that it's "nothing but amateurs and has-beens", thus having no interest in the event and wishing to return back to his homeland after the second year. 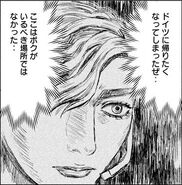