Mayuko is the wife of Mr Saionji and the mother of Ren Saionji. She was a close friend of Katherine Livington, and they were classmates for four years at the art university they attended. When Katherine's son, Kanata, came to Japan to participate in MFG, the Saionji's allowed him to stay with them.

Mayuko hosts an art classroom, and invites Kanata to join her there at some point. 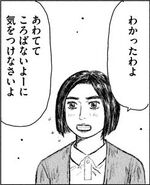 First Appearance (Chapter 6)
Add a photo to this gallery

Retrieved from "https://mfghost.fandom.com/wiki/Mayuko_Saionji?oldid=848"
Community content is available under CC-BY-SA unless otherwise noted.