MFG Angels are girls hired as support and advertisement for MFG.

Angels tend to hold the countdown boards, carry out promotional activities and add a layer of interest to the event. Podium placing racers also get to receive a kiss on the cheek from one of the angels of their choice.

They all wear the same uniform consisting of an orange short sports top with white wings and a yellow "MFG" on the front, white underwear, long orange gloves, orange boots and a white choker with a yellow heart on the front. There are drone feeds dedicated to the viewing of the Angels alongside the feeds that broadcast the races. There are currently 8 Angels.

Some of the current members of the MFG Angels team are still unidentified. 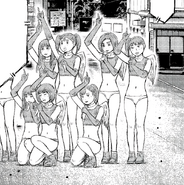 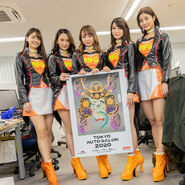