Chapter 30
Kouki Sawatari (沢渡 光輝 - Sawatari Kouki) is a racer who participates in MFG. He drives car number 4. He didn't participate in MFG Year 4's first race as since his girlfriend (Sana)'s birthday fell on the same day. He is quite perverse and says that he only dates 17 year olds, at one point wanting his car number to be 17. According to Kouki, the two things he loves most in his life are his girlfriend and driving his car to it's limits. He apparently doesn't put money in very high regard. He is considered an exceptional driver by Jackson Taylor.

He raced with Kanata countless times in Euro F3 3 Years Ago, but having troubles at Paul Richard and Hockenheimring due to his faulty car, and using the MFG as his opportunity to avenge Kanata for his losses 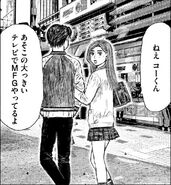