Keisuke Takahashi (高橋 啓介 - Takahashi Keisuke) is the CEO of "TK Mach Corporation", a trading company that sells aftermarket parts for cars and deals in real estate. He is the younger brother of Ryo Takahashi.

He is an old acquaintance of Kogashiwa and Takumi, and describes Kogashiwa's praise of Kanata as "too much". He calmly analyzes Kanata's driving, saying that there are some serious flaws in Kanata's driving that have not been exposed yet.

Keisuke was a member of his brother's racing teams "Akagi RedSuns" and "Project D" in the past and still has top-notch technique. He is also the driver of the demo-run shown on the official website for the MFG contestants, and his reference time was unbeatable despite Keisuke driving his outdated modified Mazda RX-7 FD3S. This was until Michael Beckenbauer and Koki Sawatari broke it in the second round.

Although he doesn't drive himself now, he is working with his brother on "Dream Project" to find young drivers. One of the members of this project is Sena Moroboshi, who has entered MFG in Year 4 Round 3.

During the summer break after the third round, he takes Sena's Supra to Mount Akagi in the middle of the night and instructs him to close his eyes and feel the road with his whole body. The exchange between the two reveals that he is already married with a child. 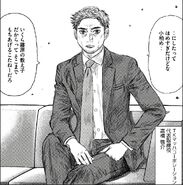 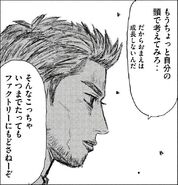 Keisuke Takahashi and his Mazda RX-7 in "Initial D"