Kanata Rivington (カナタ・リヴィントン - Kanata Rivington) is the protagonist of MF Ghost. He is a rookie racer who came to Japan from the United Kingdom in order to find his lost father. His mother is British, while his father is Japanese. He graduated from Royal Donington Park Racing School, a famous and prestigious racing school in the UK.

Kanata is supported through MFG by Ogata, who was introduced to Kanata through Mr. Saionji. Ogata is also the owner of the car that Kanata uses during MFG, having used the car himself in past years. He also has befriended and earned the support and respect of fellow racer, Shun Aiba, who has grown quite fond of him.

His goal in the race is to find his father and to push himself to his limits. He does not want to win a large amount of money and live a wealthy life, but rather to work and live like other people. That's why he started working part-time at a restaurant after the opening round, where he is popular among female customers who take notice of his good looks and personality.

Kanata is the student of the legendary downhill specialist Takumi Fujiwara, with Kanata's driving style being reminiscent of that of his mentor's. 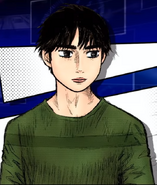