Itsuki Takeuchi (武内 樹 "Takeuchi Itsuki") is a minor character in MF Ghost. He was shown having a conversation with Kenji and Koichiro Iketani during his shift at the gas station.

A petrol station worker in Shibukawa City. He is still Takumi's best friend and is married. He supports Sena, the new hero of Gunma Prefecture, and Kanata, Takumi's student.

Itsuki used to be a member of street racing team called "Akina SpeedStars" and drive an AE85 Toyota Corolla Levin in his youth. 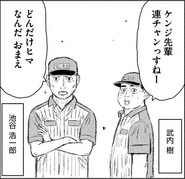